Need a Broker When Selling Practice? 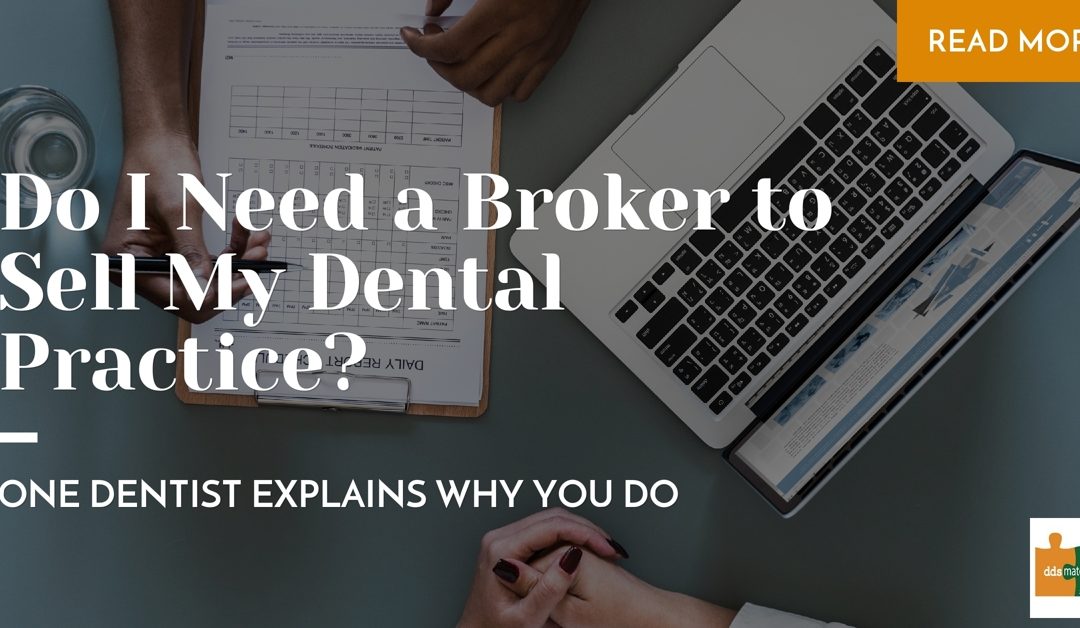 Dr. John Johnson Answers the Question: “Why Do I Need a Broker to Sell My Dental Practice?”

You’ve built a successful business as a dentist, and you know it better than anyone. You might ask yourself, “Why do I need a broker to sell my dental practice?” The short answer is, because a practice sale involves a lot more than dentistry.  Below is an interview with one satisfied pediatric dentist that DDSmatch Southwest helped successfully transition his practice. Read about his experience, and why he recommends DDSmatch Southwest without hesitation.

When did you sell your practice?

“We sold it last November [2017]. Well, it was actually October, and we closed on it the first of November. Then they asked me to stay on with them for two years in kind of a step-down method where I worked full-time for them for one year and then just part-time the next year.”

I understand that’s pretty typical. Let’s go way back to the beginning, what made you decide it was time to move along?

“Well, I just decided. My wife and I have talked it over for years and had a little health incident that showed up, and we decided it’s time to retire. We’ve been saving for many, many years to do it, so we just said now’s the time.”

About how far in advance did you start really preparing or thinking about it versus when you actually decided it was time?

“We started thinking about it about two years before we actually called Andy [Edmister].”

How did you know to call Andy?

“Through friends, talked to him. One of my friends that’s a dentist here told me I needed to talk to him, and that’s how I did it. Then I met up with him at a convention, dental convention, and we talked it over. I had already talked to a different broker, and it just didn’t work out. Andy, he had all the right answers, so that’s why we went with him.”

What was your experience with them?

“I definitely recommend going with him. It’s very difficult though for a specialist to find other people in a town like where we live, for them to come out into our smaller town. They want to stay in the big cities. But he eventually found out a way for it to work. I’m happy with it now. I’ve worked nine months into the 12-month contract now, so I’m just looking gradually a way of phasing out.”

Why are you glad that you chose DDSmatch Southwest?

“It seemed much more organized, more professional. They have different ideas and told us what to expect during the process, which, to me, an individual broker, I think, wouldn’t have been able to do that. And a lot of the paperwork was done without any problems. We also had recommendations on lawyers to look at the contracts, which I don’t know if we would’ve found without Andy guiding us in that direction.

Do you feel like it saved you any stress?

“Oh, if I tried to sell it on my own, it would’ve been crazy. It would’ve been really hard. This way, we found a qualified company to buy it that I’m happy with. We could’ve literally walked up and locked the doors. We’ve had employees that have worked with us for 20, 30, even 40 years in my group, so that was our biggest concern was how to handle our employees. We made it into the contract where they took them on, and it’s worked out well.”

It sounds like the transition plan has been pretty organized.

“Yeah, pretty. It has stumbling blocks, different philosophies and things, but the company that I’ve gone with has been just more than … they just bend over backwards to help me keep it going.”

You were purchased by a DSO. What are the pros and cons of selling to a DSO over what you think it would’ve been if you’d gone private?

“It’s more organized. They have teams of people that would come in, and that’s a good point, and it’s also a bad point because you’re used to just tackling a problem on your own, and now you have this human relations group come in and tell you how to do stuff. That’s different, but, like I said, my direct manager over the dentists in our area, they just said, ‘You just keep the practice just like you’ve been doing for 25 years.’ That’s the way it’s been going.”

You’re working essentially on their staff now, has that been a positive experience?

“You gotta be real careful with who they go with though. I mean, each DSO’s different. This one is a local DSO that was started here, and they’re just trying to build up the practices around the area, so that makes it a lot easier because they know the population. They know what they expect out of dentists. It’s just a lot better than some huge national company coming in there and buying you out.”

Do you have any other advice to someone who is in the early stages, thinking retirement is on the horizon?

“I had wished that, looking back, that I was able probably to sell to a private individual. This is nothing about the company. The company’s great. They’re going to keep the reins going and all the stuff. But the change from an individual practice to this corporate group, it’s been hard on the people in the office.

“So, I would give it a little more patience, even with Andy. Andy said, ‘Anything you want to do, you want to say no to this, let’s keep going out for a private buyer.’ We had a calendar set up where we wanted to go ahead and start moving out, so that’s why we went with this group. I know there’s buyers out there, but with the cost of school nowadays, it’s very difficult for someone graduating right out of school and a residency and being able to afford to buy a practice. To get them qualified to buy a practice would be very difficult.”

Could you tell me just a little bit about the area you’re in and how being in a smaller market impacts your practice?

[W]e’re a college city, population of about 250,000. [W]e’re in Lubbock. We have Texas Tech here, 40,000 students. The big thing about Lubbock is, we draw from all over eastern New Mexico and from Amarillo to Midland. We call ourselves a hub city, so people come from all over the area. My practice draws from about 120 miles around. People can hop on a Southwest and be in Dallas in 50 minutes. But they don’t see that.

How do you emotionally prepare yourself to let go of a practice that you built by hand? What kind of counsel would you give to somebody who’s really just saying, “How do I let go?”

“The way I look at it is, I look at my old partner when I bought him out. He stayed on with me for about seven years, eight years after, and I just pleaded with him not to retire, but he said, ‘It’s time.’ But I look at the mistakes that I made when I was just coming into the practice. You say some hurtful things. You make some wrong mistakes with staff. You buy the wrong things. You have to think back to then and what it was like and be a little more sympathetic to the new buyer and realize it’s time to start letting them take the reins and you moving out. It makes it a lot easier.”

The vision of what you want to do next is probably driving you. What do you envision you’re going to spend your time doing?

“Yeah, fishing. I’m a pilot, flying. We love cars, so we have a racetrack just a few miles away from the house. Just getting away from under that grind of the practice all the time.

“You gotta plan many, many years in advance though. I mean, we had our financial planner literally in sophomore year . . . and he goes, “I know you can’t start saving now, but be prepared for it when it’s time, and we’ll get you going.” It’s been 29 years now, and he got us prepared. You can’t just walk up the last five years and start saving. You have to be ready for it.”

Is there anything else that you wish you would’ve known or would want a dentist who’s or is getting ready to sell and considering DDSmatch Southwest to know?

“One thing Andy did for us that was really good was he talked to us about having a team on our side, the lawyer and my personal CPA. Andy and Randy all worked together on that, so when they would throw us a contract, if I didn’t have the lawyer, I would’ve been eaten up, the first time we saw it from the DSO. And it was a matter of negotiations over many, many weeks. They throw it at us, we go through, cross this out, cross that out, hand it back. We did that just back and forth for many, many weeks until it finally was acceptable for both of us.

“Without a real, nailed-in contract, I think it would’ve been a lot more difficult. I know to the tenth of a percent what my earnings are. I know what my hours are. Everything’s been written in, so there’s no question about it.”

Was it worth using DDSmatch Southwest ? And if so, why?

“I would definitely do it again. It was really a really good experience. I’m not just saying that for this interview. I wouldn’t have done the interview if I didn’t think that. But Andy just said, ‘Text me anytime of the day or night. Whatever you need, just ask questions.’ He would find an answer for it. We had many, many ups and downs all the way through the whole process. Andy even helped us when we had to have the meeting with the staff and say, ‘Hey, this is coming down the pipe.’ He ran the meeting and answered questions. A lot of people were worried and things. It just made it a lot easier. A lot of the uneasiness, he calmed it down a lot.”

Why would you recommend DDSmatch Southwest?

“I just think they’re highly accurate. They work for you. Very friendly, very knowledgeable, and they’ll take care of you. If you have any issues, you tell them, and they’ll watch out extra carefully, just to make sure those issues are covered before you actually sell. There was no time in the process where I couldn’t have walked up to him and said, ‘Andy, this isn’t right. We’re out of here.’ He would’ve said, ‘Okay, let’s go. Let’s move on.’”

You really felt like DDSmatch Southwest was on your side?

Don’t Put Your Dental Practice for Sale by Owner

Dr. Johnson’s experience with DDSmatch Southwest shows the real value of using a broker. With 30-years experience, no one knew his practice and his market better than him. But the market he knew was for selling dental services, not the market for selling dental practices. Instead of just assuming, “I can sell my dental practice on my own,” Dr. Johnson recognized the complexity of brokering a sale (legal, real estate, valuation, finding the right buyer, getting it done on schedule) is far beyond the expertise of even the most experienced doctors.

If you want to maximize value and minimize hassle, don’t run the risk of putting your dental practice for sale by owner. Let DDSmatch Southwest do the work for you. If you are thinking about transitioning your practice, DDSmatch Southwest offers a free Practice Transition Assessment and uses a Trusted Transition Process, with proven results as seen with Dr. Johnson. Call and schedule your free no-obligation consultation today.