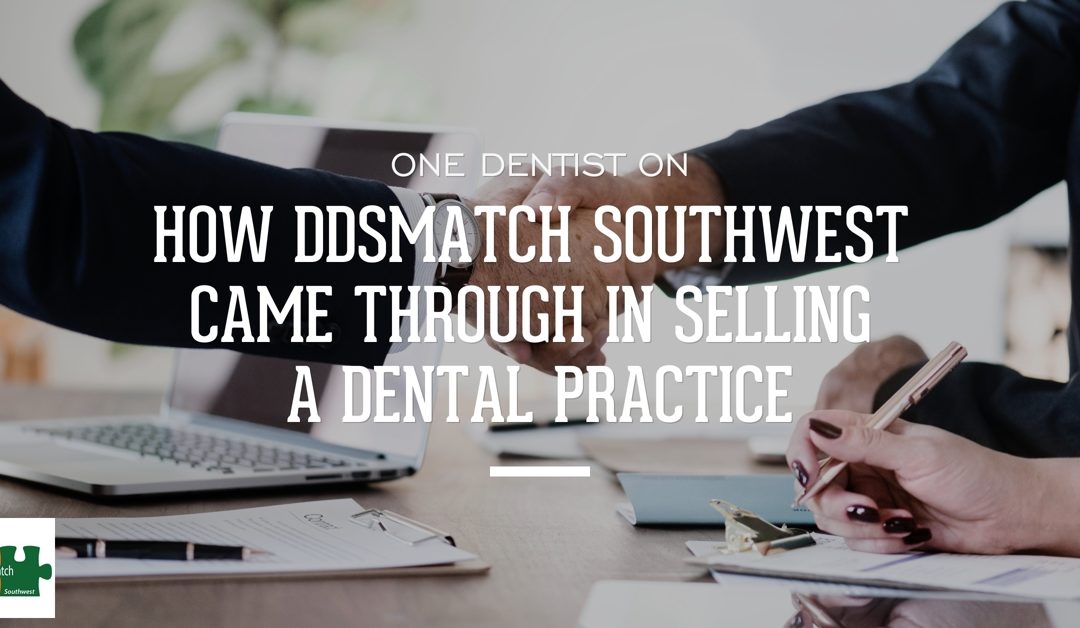 Dr. John Ward has over 40 years experience providing dental services in all phases of dentistry and all ages—ranging from 18 months to 99 years of age. When presented with an opportunity for selling a dental practice, he put his trust in DDSmatch Southwest. Below, Dr. Ward explains in his own words, why he trusts DDSmatch Southwest and why you should too.

How did you come about deciding it was time to sell your practice?

I’ve known Andy [Edmister] since he was in college, and he now has a daughter in college, so I’ve known Andy for a long time. Andy came into my office one afternoon, the Thursday before Labor Day of 2014. At the time, Andy was selling large dental equipment, so I thought Andy was coming in to talk to me about selling a quarter of a million dollar x-ray unit. Andy walked in, said, “Doc, can I talk to you?” I said, “Sure.” We walked back and he said, “I’ve been working with the sale of Dr. X—I’m not going to use her entire name—Dr. X’s practice, and she said you might be interested in selling your dental practice.

At the time I had two full-time jobs. I was working my dental practice, and then on weekends I was driving 200 miles to work in a federal prison in Pecos. My normal routine was Tuesday, Wednesday, Thursday, Friday until 1:00 in my practice, take an hour’s break, drive 200 miles and then work 50 hours over the next three days, three-and-a-half days, and then do that week after week after week.

I looked at Andy. He said, “I heard you were interested in selling your practice,” and I laughed. We had a calendar on the board, one of those permanent calendars you erase and mark in. What I remember was that Labor Day was September first. I had September, October, November. I pointed to the last Thursday in November and I said, “Andy, in the next three months, that is my day off. I have one day off, Thanksgiving, in the next 91 days.”

Andy said, “I have a young man who might be interested in purchasing your practice.” And I said, “Well, I have no interest in selling my practice, but I have no interest in not selling my practice.” He said, “Well, he’d like to take a look.” I said, “Okay, Andy.” I was going to be heading to my other job the next day, so I said, “Here are the keys. You’re welcome to come in, look around the practice, see what you want.” Because I knew Andy, so I didn’t have any problem with the trust issue. I said, “Talk to me later.”

As it turned out, about four or five days later Andy stopped back in and said, “The young man is interested in buying your practice.” At the time, I owned the practice and I owned the building. Andy said, “Are you interested in selling the practice?” I sat there, sitting in a room with Andy, and I said, “Okay, Andy. If I sell the practice I’m selling the building. I don’t want to be anyone’s landlord.” What I didn’t want was if someone bought the practice and six months later walks out and I’m stuck with it, or if someone wants some changes in the building, and then you’re arguing over whose issue this is and that is.

I said, “Andy, here’s my number. This is what I want to walk away with.” I said, “I want full price for the building because it’s in a great location and there’s no need for me to give a bargain on that.” But I said, “I’m going to give a bargain on the practice because the equipment, even though it’s great equipment, is older equipment, and in the next three to five years he’ll have to replace a certain amount of it. I don’t think it’s fair that he should pay top price when he’s going to have to do that.” Andy said, “Sounds good to me.”

I said to Andy, “Andy, I don’t care. I don’t know what your percentage is, I have no idea, but this is what my number is.” Andy said, “Okay.” Then, over the next eight weeks, Andy worked very hard to put the package together. There was some issues going on because, since I had not planned to sell the practice, I had not prepared all the financial stuff. When they went to the bank, the bank wanted certain stuff that I had not prepared because, as I said, it was not my original intent to sell the practice.

Andy worked very hard to get all that together to obtain that, to help me to put that whole package together, so that the buyer could go to the bank and present it. Once we knew what the bank wanted, it was very easy in putting the package together because it was a solid, profitable practice. Part of it was based on my tax statement. You get towards the end of the year, you’re thinking, “Okay, I’m going to pay this much in taxes, so I need to buy this and do this so that I lower my tax liability.” The bank was looking at some of that thinking, “How could you be so profitable and have this tax setup?” Because I’m smart enough to know that I don’t want to pay taxes. Andy worked with me to get all the correct numbers so that when it went to the bank, it was an easy flow.

Then at the end of July of 2017, the prison closed, and now I’m in East Texas, in Longview, Texas, working in a very busy fast-paced practice. Andy has come to me a number of times and said to me, “Doc, if you’re looking for any positions, I have positions open. I have positions available, and you know that I’d be tickled pink to move you into one of those.” I said, “Andy, right now I’m in a great position.” Andy has always been very, very supportive, very thorough, very proactive. I thoroughly, thoroughly enjoyed the process. He made it easy for me, and I couldn’t think of a better person looking in retrospect to have handled that than Andy. I give him all the kudos in the world because he handled that with smoothness, with grace, with intelligence. It was handled very, very well.

It sounds like you would definitely recommend them DDSmatch Southwest for selling a dental practice.

As a seller, what do you think are the main reasons that someone should choose DDSmatch Southwest?

Andy handled everything on a very personal level. Your issues were his issues. He did a really good job of balancing the concerns of the buyer versus the concerns of the seller. I know in my case he picked out a young man whose desires were very compatible with my practice. He helped the young man when the young man was running into some barriers because of what I supplied being much more rudimentary than most people would need. I will tell you that he’s not going to let anyone else get away with what I did, but Andy knew me on a personal level. Andy handled it from both sides in order to make it easy for the young man to be able to obtain the loan and for me not to have to get overwhelmed with all kinds of paperwork and bureaucracy.

It sounds like Andy is pretty patient and that working with him was very comfortable.

What kind of advice would you give to people thinking of selling a dental practice? Looking back, is there anything you wish you would’ve known?

Like I say, I was very lucky because Andy handled this for me. The funny thing was that I had known Andy for years and Andy was a friend. I don’t think I appreciated that, and it’s not a bad thing. Let’s put it this way, looking in retrospect, I appreciate more how hard he worked and how he was in my corner looking out for me, because I really had no idea on anything. Mine was, okay, all of a sudden one day I’m working and the next day I’m selling my practice. I just happened to find someone … and this is the way Andy is.

Like I say, I’ve known Andy for years. He’s an honest, straight shooting, very heartfelt person. He’s looking out for your best interest and he did that with me. On the other hand, he looked out for the best interest of the young man who bought the practice. I don’t think the young man who bought the practice appreciated that until he had the practice for a couple of years. I think it finally occurred to him, especially as he started talking to friends of his who had purchased other practices and who had used other brokers and realized those people weren’t looking out for my best interest. Andy did a great job of the balancing act and looking out for both the buyer and the seller.

As I said, the thing that was amazing with me was that I absolutely knew nothing, but absolutely had an amazing experience, and that’s because Andy took good care of me. Looking back, I wouldn’t know … Like I said, because it was handled so well, the experience was a totally positive experience.

He’s a good guy. He looks out for his clientele.

Selling a Dental Practice is Better with DDSmatch Southwest

Just as with Dr. Ward, DDSmatch Southwest can help you both prepare for your practice transition, and throughout the transition itself. First, we offer a free, no-obligation Practice Transition Assessment. If you are considering transitioning in the next five years, we’ll meet with you, look at your practice, and discuss what you should be thinking about with your specific market and whether there are investments or improvements that will get you the most out of your sale.

Second, we’ve assisted hundreds of dentists from across the country transition their practices. We’ve taken that experience and created a Trusted Transition Process—a clear, consistent path to selling a dental practice while maintaining the legacy you’ve worked so hard to build.

Don’t take chances with the the biggest deal of your career. Give us a call today and find out how we can help you get what you want in your transition.